Due to the recent #wannacry ransomware events, we initiated a quick test in our lab.

Unfortunately, our tests shows otherwise. Warning: We only tested the exploit and the backdoor, but not the payload (Wannacry)!

We don’t want to disclose our test results until a fair amount of time is given to vendors to patch their product, but meanwhile we feel that we have to inform the public about the risks.

The following   6 products protected the system against the ETERNALBLUE exploit installing the DOUBLEPULSAR backdoor and dropping a payload/executing a shellcode:

Two product used network filtering to detect the exploit, and block it before kernel code level execution happens. We have not played with how these techniques can be bypassed (e.g. via obfuscating the exploit to bypass signatures), but that could be the content of another blog post.

Update 2017-05-22: The BSOD was on Windows7 64-bit with Symantec Endpoint Protection using VMware. After discussing this with Symantec representatives, it turned out this is not what average users should see. So we tested it on a physical machine with Windows7 32-bit and Norton Internet Security, and the attack was blocked and logged, and there was no BSOD.

The BSOD that wasn’t

At the moment (with the latest updates), we have tested 10 home Internet Security Suite products,  2 Next-gen endpoint protection (Updated on 2017-06-14), 1 EDR and (UPDATE 2017-05-22) 1 micro-virtualization based solution which can’t protect (or alert) users against ETERNALBLUE exploit installing the DOUBLEPULSAR backdoor. All vendors claim to protect against #Wannacry and some claim to protect against ETERNALBLUE. But here is the thing, protecting against the payload does not mean users are fully protected against malicious code running in kernel mode. 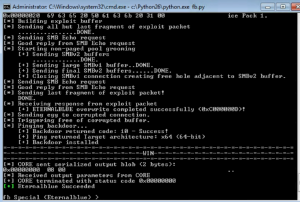 Our focus of test were mostly home products (internet security suites), and whenever the default firewall policy was set to public, we changed the policy to home/work. All products were used with default settings. Some products for example have intrusion prevention turned off by default – and enabling it blocks ETERNALBLUE. But not many home users tweak default settings.

Cylance has created and shared online a video attempting to demonstrate how their product CylancePROTECT protects against WannaCry:
The interesting part of the video starts at 5:00. The Doublepulsar backdoor is already installed and this means the system is already compromised and it would appear that Cylance did not realise this.
There are YouTube tutorials on how one can drop Peddlecheap in-memory payloads with Eternalblue and Doublepulsar. We recommend to test this scenario for yourself on an endpoint protected with CylancePROTECT.
Update 2017-06-20: We got a feedback that this part of the post is not easy to understand. The key point here is that whenever you can see that Cylance blocks the malware payload on the protected machine, this means malicious code was already running on the machine, and this code successfully downloaded malware, and tried to start it, but it was blocked. Now let’s imagine a case when the machine is infected with a code which is not written to the disk, and this code starts in a way which is not detected by Cylance. This means it can bypass Cylance completely.

It is nice that all the AV vendors claim to protect against the ransomware payload, but in case there is a backdoor running on your machine in the kernel level, things are not that great.

Please note the ETERNALBLUE exploit was published basically 2 months before Wannacry and this blog post.

We are in the middle of contacting all AV vendors about the issue. Although we guess they already know this, they only forgot to notify the marketing department to check their communication.